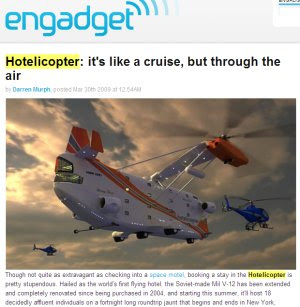 A few days ago, there was a post on Engadget hailing the maiden voyage of the Hotelicopter.


Though not quite as extravagant as checking into a space motel, booking a stay in the Hotelicopter is pretty stupendous. Hailed as the world's first flying hotel, the Soviet-made Mil V-12 has been extended and completely renovated since being purchased in 2004...

The post garnered over 80 comments but is now  completely gone.  What gives?

It appears that they and others got caught with their crap detectors turned off and they fell for a beautifully constructed hoax, perpetrated at www.Hotelicopter.com and kicked off with a couple of posts to Twitter .

We wish we could show you the promotional video at Vimeo, but it's gone. What we can offer you is one last look at the flying hotel that never was. 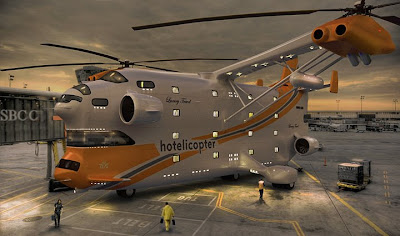