For many months, I've made it a point to go to carve out a bit of time each week and go to the local cigar shop and light a stogie with friends. As I experimented with Twitter and Facebook, I'd mention that we were going to do it and then more people would show. If they liked it, they would bring their friends and so forth until this grew into a bit of an event. With as few as eight and as many as twenty-two, we've had memorable presentations by our regulars on "The Art of Being a Gentleman", "Alligator Hunting", and "Running with the Bulls." We've talked about our lives and our businesses. We generally have helped each other in a sometimes gentlemanly and always neighborly fashion. What made this work was we had an inviting and available space in which we could comfortably share a cigar and a conversation. And it was good. The weekly gatherings of story telling and problem solving have meant so much to me that it is now with teary eye that I report that our frequent haunt can no longer welcome us. I dropped by Halfway to Habana on Wednesday to find out it has gone nearly, but not quite completely, now brace yourself for this -- smokeless.

I've heard stories of conflicts with neighbors, landlords, and city government. I really can't say that it makes sense to me. What I know for sure is that the large dining space in which I've happily shared bourbon, meals, and cigars is no longer available for that purpose. Smoking is now restricted to a very small lounge area which has available seating for six to eight, all of whom are to be members of H2H's private club. It's a cigar and martini bar with no place to smoke. 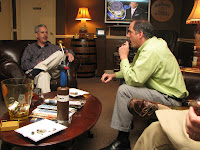 Since seating for six won't even come close to accommodating our group which now ranges from twelve to twenty, it was suggested that we meet on the deck. In fair weather the deck is a wonderful place to sit. Today it's projected to be 56 degrees with light and variable winds and Greenville is currently under a winter weather watch. Maybe this would work. We've even been offered a couple of outside portable heaters to fend off a chill. The problem is that wasn't what I had in mind. Sitting on the unsheltered deck in the glow of a portable heater conjures images of hoboes sitting around burning trash barrels to me. It is so far removed from my ideal scenario of sitting in a warm leather chair with an Alec Bradley Tempus in one hand and a single malt Scotch in the other, that I think I'm going to take a pass. Cigar Therapy was fun, and now it's done.

Thanks for all the memories. I hope we get to make some more real soon.